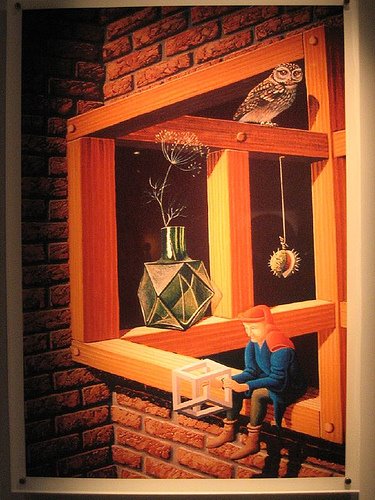 My previous piece on the paranormal has recalled some ticklish issues that I haven’t scratched in a while. In particular: how to be sceptical of eye-witness evidence without attacking the sanity or integrity of the witness. This is my attempt to square that circle.

Some years ago I was in DisneyWorld, Florida, and, having enjoyed a few of the more alarming rides, I decided to wander around some of the lesser known attractions. One such was a simple booth, inside which I was instructed to wear the headphones provided and to close my eyes.

Uncertain of what to expect, I did as I was told and was utterly gobsmacked by the ensuing experience: using only stereo sound, the Disney audio-engineers managed to create the physical impression that my hair was being cut (admittedly by Mickey Mouse, but, hey, this was the Magic Kingdom).

I could feel the cold steel of the scissors against my neck and the comb running through my hair. I could even feel the presence of someone ~ Mickey! ~ standing and moving behind me. I swear I even felt his breath on the nape of my neck. So impressive was the illusion that I immediately assumed trickery and opened my eyes, fully expecting to see a real person there, complete with scissors, comb and mouse breath – but, no, I was alone.

This was an excellent demonstration of how well the brain can engineer holistic sensations from limited input: brain science theorises  that much of what we experience as “the real world” is actually a representation, as interpreted and formatted by our grey matter. Most of the classic illusions, like the one pictured above, are by-products of the brain’s ability to impose order on chaos and find patterns upon which it can hang its hat (think how easy it is to see human and animal faces in knots of wood and clouds). Thus, given realistic sounds, at the right volume and correctly triangulated for stereo hearing, it was but the work of an instant for my brain to populate the experience with the physical sensations which ought to be present. It was able to call upon all my previous experiences of haircuts and, in a sense, play me back just the right tape.

Scientists have shown that sound can also induce strong emotional responses in people: low frequency sound, especially, although mostly inaudible to the human ear, can trigger a variety of reactions, including fear, coldness and nausea.

Low frequency sound can be a natural occurrence (seismic waves; coursing water, or wind blowing through a suitably shaped tunnel, for instance) or can be man-made (the hum of a generator, Mike Rutherford’s bass pedal). By definition, when subjected to low frequency sound, you are not able to specify what is creating the feeling, leaving an information vacuum which the helpful brain is only too willing to fill. For those with a predisposition to believe in the paranormal (and even for those without) it is not fanciful to suggest that the brain might conjure a ghostly presence by way of explanation. Indeed, the more one expects to see a ghost, the more likely it is that unexpected or unidentifiable experiences are so interpreted.

My point, here, is that believers and non-believers often come to blows over the question of truthfulness. The message sceptics like me often transmit to those who have experienced ghostly phenomena is “you must be lying, or, if not, you are just stupid.” However, for someone who has experienced it, seeing or feeling a presence was their subjective reality, their honest interpretation of the situation. Thus, while remaining doubtful of the alleged cause, one cannot immediately doubt the integrity of the storyteller.

Some years ago, for example, I met a man and his wife who were convinced they had a poltergeist in their house. I asked them why. “Well,” he said. “My wife’s very particular about the way she lays out her dressing table. Everything has to be just so. If anything gets moved, she knows it immediately. For the past two months, while I’ve been mostly away, she’s woken up some mornings to find everything jumbled up. At first she thought our young daughter was mucking about with her things, so she started locking our bedroom door at night, but it still keeps happening.”

His wife was clearly unnerved, by her experience. “It must be a poltergeist,” she said. “There’s no other explanation.”

I asked the husband if it had ever happened when he was at home. “No,” he said. “I think it is fixated on her. When I’m home nothing ever happens.”

I was pretty certain that the reality was a great deal simpler, but was fascinated how the explanation had begun to assume a life of its own. Not only was there a poltergeist, but it was fixated on the wife. When she disappeared to the toilet, I asked him if he had ever doubted her story. “No,” he said. “Not for a moment. She would never make up anything like that. We’ve been trying to find out about the history of the house, and we’ve read up about poltergeist activity. A poltergeist tends to centre on one person, usually someone who is a bit stressed. And my wife does get a bit stressed when I’m away, what with having to look after our daughter and all.”

Having formulated a theory, they were busily accumulating supporting evidence for it: it’s not hard to imagine that their next step might have been to go and join a local spiritualist group, where they would no doubt find plenty of people happy to offer still more support and understanding. If they found something unusual in the history of the house – being an old place, there would almost certainly have been at least one person who had died there – that, too, would add further fuel to the fire. All the time they would be steadily diverging from a simpler explanation, that the wife was sleep-walking. I couldn’t prove it, of course, but given the circumstances I’d have offered pretty good odds.

People don’t always respond well to simpler explanations. Often they become defensive, sometimes they get extremely upset. Personally, I’d be pleased to think I wasn’t being haunted, but there you go, that’s humans for you. Rather than venture down that road, I suggested that they check out a sleep therapist, as poltergeist activity is often associated with disturbed sleep patterns. The guy was suitably grateful for my interest and we parted, never to meet again.

I don’t know if they ever did go to a sleep therapist, or whether maybe the planted seed took root and they thought it through a bit. I don’t actually know whether they were haunted, or whether my explanation was closer to the truth. What I do know is that we have a seemingly limitless ability to find our own truths in a variety of situations: we are imaginative creatures, and sometimes our imagination is our reality.