The Wind In The Marlowes 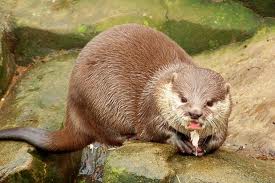 I wrote this blog in 2006, after reading the following news story:
Otter busts out of zoo, now on the run
Jin the otter is still on the loose after leading a daring breakout from Auckland Zoo.
The four-year-old Asiatic short-clawed otter dug her way through two walls and scaled a 1.8 metre barrier to get out of the zoo last week.
She then swam across the city’s harbour.

Two other escapee otters were recaptured the next day, but there was no sign of Jin until she was spotted at a North Shore suburb 10km from the zoo and on the other side of Waitemata Harbour.

“While otters are good swimmers, we’re absolutely stunned at the distance she has travelled,” curator Maria Finnigan said.

The Mole had been working very hard all the morning, scrubbing out his little cell. First with cloths, then with a toothbrush, on his hands and knees till he had prison dust in his throat and eyes, sweat all over his black fur, and an aching back and weary arms. Cons were moving in the cells above, below and around him, penetrating even his dark and lowly cell with their uncouth language and raucous profanity. It was small wonder, then, that he suddenly flung down his toothbrush on the floor, said ‘Bother!’ and ‘O blow!’ and also ‘Hang swabbing!’ and bolted out of the cell without even waiting to put on his convict overalls. Someone up above was calling him imperiously, and he made for the steep stairs which passed cells inhabited by animals whose crimes were greater than his, climbing laboriously until he reached the refectory.

Toad and Ratty were lolling at the table conspiratorially.

“It’s The Otter, Mole,” exclaimed Ratty. He lowered his voice to an urgent whisper: “Word’s out that she has escaped!”

“Isn’t it just the most wonderful news?” Toad beamed.

Mole was not so sure.

“I’m not so sure,” he said, doubtfully. “Do you think she’ll be quite alright?”

“You surely don’t mean to stay in this dull fusty hellhole all your life?” Toad was impassioned, his eyes gleaming. “I want to show you the world! I’m going to make an ANIMAL of you, my boy!”

Ratty looked worried. “But…who knows what’s out there, Toad? There might be ferrets, weasels and stoats!”

“Look around you, Ratty. I don’t like to break it to you, but this place is full to the brim with ferrets, stoats, weasels and worse. We should follow Otter. It will be an adventure! Good old Otter! I wonder how she’s doing?”

On Saturday nights in the summer these mean streets are filled with more crazies than a toilet at a Cystitis convention. Only a fool would go looking for trouble, but then I guess I must be all kinds of a fool because on the glass door of my shabby office are inscribed the words “HAMSTER P.I.” Apart from myself, my janitor and my turf accountant, the only thing to walk through that door is Trouble, and when he comes visiting he usually brings a Beretta.

This particular night it’s cold, being winter, and business has been slow. Even Trouble has been in bed with a hot water bottle. So, as I climb the ricketty stairs to my office, I’m more than a little surprised to see the light is on. Instinctively my hand closes around the comforting blue-grey steel of my .45 Magnum. Slowly I push the office door ajar.

She is sitting there behind my desk like a vision painted by some Italian Renaissance guy. Dark brown in colour, the size of a small cat, with a pale belly, and a long fat tail that tapers off towards its end. I let out a low whistle of admiration, and, instantly, her brown eyes turn on me.

“I can see you already know how to whistle,” she says in this low, husky voice that sends shivers on a route-march right down to my buttocks.

“Yeah,” I quip lightly,”It comes in handy at parties.”

There is something very familiar about her, but for the moment I can’t put my finger on it. I relax my grip on the gun, however. If this dame is trouble, then she’s the kind of trouble that ought to come with whipped cream, a blindfold and a king-sized water bed.

“So, lady, what brings you to these mean streets?” I ask.

Her eyes bore into mine like she hopes to strike oil any time now. “I’m here because Toad told me I could trust you.”

“Toad?” My eyes must have opened wide with surprise. “But he’s in…”

Now I know why she looks so damned familiar. Her picture is plastered at every station, bus-stop and shop window in the city.

“Jesus, lady!” I gasp. “They got every flatfoot in the country looking for you.”

I can see now that Trouble hasn’t been in bed with a hot water bottle at all. Oh no: he’s taken up cross-dressing and he smells just like a dame.

She puts a cool finger to my lips. “I liked it better when you were whistling,” she says. “And the name’s Jin.”

“Lady…Jin…jeez, this is just crazy. You want me to play hide and seek with you and a thousand Feds. These mean streets have ears, you know. And eyes. And, er, teeth,” I tail off lamely.

She leans in towards me and I get another whiff of that intoxicating perfume. “But I heard you are the meanest thing on these mean streets, Mike.” Her finger trails down my chest and I hope she cannot feel my heart which is performing a drum solo in 13:6 time.

“I can pay you for your trouble. Toad told me where he keeps his stash.”

And so my troubles begin…