Posted on December 2, 2011 by captainlimey

Perhaps it is a sign of national egocentricity, but we English have always rather felt that Christmas belonged to us; sprang fully formed from our cultural loins, as it were.

We listen politely when informed that it was Prince Albert, a German, who introduced the Christmas Tree into our hitherto needle-free parlours; we affect an air of courteous interest when told that Santa Claus is a corruption of Saint Nicholas, who – far from being a jolly old English gent with a merry twinkle, an addiction to soot and a penchant for mince pies and sherry – was, in fact, a Greek, born in what is now Southern Turkey; we smile patiently when learned historians, and other buffoons, challenge our conviction that we spread the Great English Christmas in a globe-encircling diaspora of Victoriana; we experience mild cognitive dissonance when the differing customs and traditions of other countries are shown to us via the wonders of television. “How could they have got it so wrong?” we cry, as one. “Did we not teach them all we knew? Did we not make the concept of wassailing clear?”

Lacking a scapegoat, our natural inclination is to blame the Americans. We understand that, as a nation, they have never truly forgiven us for casting them off like an unwanted slipper in 1776, leaving them to fend for themselves in the big, bad world, without the indulgent patronage of their mother country (you’re doing very well, by the way, America. We knew it was the right thing to do, even if you wouldn’t thank us for it).

Like spoiled children they, not unnaturally, stamped their collective foot and, at a stroke, redesigned the English language without the letter “u”, threw all their tea into Boston harbour and, thereafter, have never truly rediscovered the art of the nice cuppa. Worst of all, knowing it would be a dagger to the heart of the English psyche, they renamed Santa Claus “Kris Kringle” and invented the Grinch as his arch-enemy, as if Christmas were some sort of Marvel comic book escapade. They even cornered the market in heart-warming Christmas movies, and – just to rub salt into the wound – borrowed little Dickie Attenborough for the purpose.

Well I, for one, cannot let the Americanisation of Christmas go unchallenged. I am English and proud of it; I even have all my own teeth, unlike the majority of my compatriots (most of them have thrown their teeth away; I keep mine in a box under the bed). It is high time the world was reminded exactly where Christmas began – and for those of you thinking “stable”, “somewhere in the Middle East”, “wise men” and “Angel of the Lord”, please forgive me if I harrumph. Christmas, as we know it, began in the towns and villages of Olde England, whence germinated all that is best about the festive period, namely the quaint customs and obscure folk traditions.

There are many to consider: from the West Country traditions of weaseling and knock-bunting, to Norfolk’s ringing in the ranunculus andKent’s, outlawed, kissing the peacock. Alas, I can detail but a few; nevertheless, as we embark upon a whistle-stop tour of England at Christmas, I hope you will revel in the quaintness of it all.

We begin in the industrial town of Basingstoke, Hampshire – officially the Pickle Centre of England –where pickle mines still operate much as they did in Victorian times and the strong tang of vinegar permeates the early evening air. It is Christmas Eve: we pass throngs of tired Pickle Miners, just knocked-off from a hard week’s pickle-grubbing, looking forward to a day’s rest from labour, plodding home in their cloth caps, hobnail boots, and preternaturally pungent horsehair shirts. (Although this is essentially a tour of the imagination, you might prefer to hold your nose before we continue.)

As the Pickle Miners doff their caps, tugging at their forelocks in gratifying obeisance, it’s sad to think that this is one of the five riskiest jobs in the world: one slip, or a misplaced footfall, and you’re pickled. In the old days, the cry would go up “There’s trouble at t’Dill!”: the whole town would rush to the mine entrance and, in grim helplessness, wait for news. Those were harsh times, but, looking on the bright side, the dead never needed much embalming, which saved greatly on funeral costs.

At Christmas, these stout yeomen still perform the medieval ceremony of Calling In The Pickle. The town Picklemeister reads aloud “Ode On A Pickle”, an opus variously attributed to Shakespeare and Marlowe, but, in reality, the work of Gervase Merryweather (1701-1743), one of England’s lesser poets. The poem has three hundred and two verses, of which, mercifully, I shall quote only one:

Come from within thy malted tomb, that thou might be procured!

Come grace our laden tables with thy acid succulence

And let us charge thy brethren out at more than half a pence.

At the poem’s conclusion, a mass pickle fight ensues. Amid the scrum, the search is on for the Grand Gherkin – a year’s supply of pickled parsnips from the High Sheriff of Hampshire’s personal pickled parsnip panoply awaits the lucky retriever of this coveted trophy.

As night falls upon Basingstoke’s merry scrimmagers, we travel south-westward, over the lantern-lit towns and villages of Wiltshire, Somerset and Devon and by-passing Wales completely (Wales is not English, in much the same way that Canada is not American). The land becomes steadily more rugged, until the wild Atlantic draws ever closer, its ocean tang assaulting our nostrils and its salt-spray spattering our faces. We have come to Cornwall, the most southerly tip of England, to seek out the centuries-old custom known as Fleeing The Pudding.

Ahead is the tiny hilltop village of Trepanning, whose stone stairwell leads down, in a dizzying spiral, to a small harbour. Each Boxing Day, villagers gather to set fire to a gigantic Christmas Pudding. It has a circumference of 30 feet, is smothered in 400 gallons of smuggled French brandy, contains 37 tons of suet and several sacks of dried fruit, not to mention the occasional, unfortunate, household pet. A group of ne’er-do-wells from the local jail is given a short head start on the stairway, then the blazing brandy ball is freed and the race between man and pudding begins in earnest. The lucky few who make the harbour in one piece count their blessings as they bob in icy water, largely ignored by rescue services. The less fortunate are no longer a burden to the taxpayer. The Cornish are a hard, but fair, race and figures for re-offending are generally low. 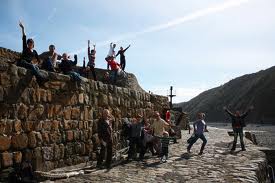 Northward now – ignoring Wales again – and we turn right over Mold (a place, not a blight). There we happen upon the Cheshire village of Middlewitch Magna, home of the festive parlour game Hide and Hide, during which many children hide, and nobody at all bothers to look for them. The origins of Hide and Hide are obscured by Time’s dusty net curtains, but records show that, in 1756, by way of testament to the game’s enduring popularity, the ninth Duke of Chester made a gift to the village: a statue dedicated to the Unknown Hider, which is carefully concealed in an undisclosed location, well away from prying eyes.

A dog walker unwittingly passes the statue of the Unknown Hider

A Victorian variant, Blindfold Hide and Hide in the Dark, was outlawed twenty years ago as potentially “too exciting”. It is rumoured that, if you knew where to look, there is still a thriving sub-culture, but, if any such hiders do exist, they are supremely gifted and will probably remain undiscovered for at least three times their natural lifespans.

And there  – all too soon – I am afraid we must leave our peregrination through Old English customs. Thank you for allowing me to be your unofficial guide. May I wish you all an extremely Merry Christmas and a Happy New Year.

To conclude on a charitable note, don’t forget that for just £5 (that’s about US$30) you can adopt a Pickle Miner and feed him and his entire family for a year. You can find out more at http://www.pickle-aid.org/donations.

Captain Limey is the alter ego of a mild mannered idiot. He can also be found on Twitter, either as @CaptainLimey or in his new guise as a purveyor of Gangland Mummy Porn in @50ShadesOfKray. Despite a magnificent costume, specially created for him by his mother, he has no super powers, unless you count the ability of his skin to eat through metal, given enough time. This has led to the buggeration of several watches of his acquaintance but has not thus far proved harmful to other lifeforms. The Captain hopes you will enjoy his blogged musings and forgive the occasional rant against the world at large, and idiot dictators in particular. They really get his gander up.
View all posts by captainlimey →
This entry was posted in Whimsy and tagged Basingstoke, Christmas, Christmas Puddings, Cornwall, England, Old Traditions, Pickle Miners, Pickles, Trepanning. Bookmark the permalink.

4 Responses to Discovering Christmas In England