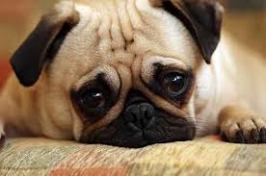 I have regaled you in the past with tales of my more recent holidays, but the time has come, I feel, to recount a story from my first ever holiday abroad.

I was reminded of it the other day, when I found an old photo of myself on a Spanish beach surrounded by three bronzed beauties from Kent. You can quite easily see the girls, with their toned, tanned, bikini-clad bodies, but I am pretty much indistinguishable from a fault in the film due to the glare of the sun reflecting off my lilywhite bod. Which is a shame, because otherwise it would be a deeply impressive photo to show jealous chums. Needless to say, the girls play a central role in the tale that follows:  a tale of heartache, despair and destruction, all wrought, single-handedly, by a small dog…

We were staying in an appartment in Santa Ponsa, four of us, all aged about twenty. There was me, my mate Mark from college, his mate Graham from work, and some guy from London who was Graham’s mate. I can never remember his name, but I do recall that he was a jerk. “I’m going to screw every chick on the island and get drunk every night,” he told us on the plane. In the second prophesy he proved startlingly accurate, but, as a result, he never managed to trouble the scorers on the first. We briefly contemplated suggesting that he try wooing a girl before he got bladdered, but, frankly, we didn’t care that much, so Plan B never got off the ground.

By the time we met up with the three girls from Kent, he was such a depressed annoyance that even Graham had given up on him. Towards the end of the holiday he wouldn’t even venture out of our apartment on nights out, which, to be honest, suited us fine. The girls from Kent numbered three, Graham, Mark and I numbered three: do the math, as the Americans say.

Looking back on it, I would have to say that we were probably way out of our league, but we were too young and foolish to recognise that fact at the time. Which is how we came to meet Bright Eyes.

Bright Eyes was a squat, pug-faced pooch who hung around the restaurants of Santa Ponsa begging in the hope that tourists would feed him. His name was given to him by Anna, one of the Kentish girls, who had fallen in love with the mutt and would feed him scraps all night, even scrounging other diners’ leftovers so that the little bleeder didn’t die of starvation.

“Oh look at his tiny bright eyes,” she would gush, approximately once every ten minutes, “who could resist his cute little face?”

On balance I think the fair answer to that question was probably “all of us except you, Anna”. Had she not been a statuesque blonde of some distinction, it’s likely we would have said so, too, but Mark had set his cap upon her. He figured that his best interests lay in a “love me, love my dog” strategy. Such base psychology is only made sadder, in hindsight, by its staggering success. For a few days he and Anna became an item, which meant, of course, that we spent a whole lot of time with the girls generally.

On our last night, Bright Eyes had a singularly fine evening’s dining, courtesy of lovebirds Anna and Mark. The snuffle-nosed pooch consumed chicken, paella, beefburgers, chips, more chicken, steak, more paella, even ice cream at one point. His tiny button eyes gleamed greedily as each new morsel flew down from the gullible blonde Goddess he had artfully adopted, and her shameless temporary boyfriend.

When at last it was time to go back to her hotel, Anna could not bear to be parted from her tiny chum (Bright Eyes, not Mark) and so Mark said: “Why not come back to our place and bring him with us?”

This was an off-hand suggestion of some ingenuity, allowing, as it did, the opportunity for all three girls to come back to our appartment, an event of considerable magnitude in our fevered imaginations. It seemed to work like a charm, too: the girls agreed instantly, and so we made our way back to the apartment, bearing the bloated hound with due care and attention: “Don’t drop him,” entreated Anna, “he’s my precious!”

You can only imagine the fond hopes that beat in our three manly breasts as we made our way back to the apartment, trophy Kentish girls in tow. This was to be IT. The night. Nothing could now stand in our way, right?

A strange aroma assailed our nostrils as we opened the apartment door. It was a pungent combination of body odour and feet that would have stunned a bison at two hundred paces. Whatever it was, it should certainly have been banned under the Geneva Convention, and I can only thank God that Saddam Hussein never got to hear about it.

He had a tub of murky, grey-blue water in the middle of the main room, in which — you may want to skip this next bit if you don’t have a strong stomach — floated various items of underwear too loathsome to recount in detail. Suffice to say that socks that would never be white again vied with underpants that had more skidmarks than a pile-up on a motorway. You have to ask the rhetorical question: what kind of moron washes his smalls on the last night of a holiday?

The girls wrinkled their pert noses and decided that, on balance, they did have to be up really early, and so, if we didn’t mind, they’d probably better be getting back to their hotel to bed, thanks anyway, goodnight. We heard them clattering away down the stairs, running from the dread scene as fast as their stiletto heels would allow.

Anna lingered long enough to say a fond farewell to Bright Eyes, and bade Mark look after him for the night: “The poor dear doesn’t know his way home from here.”

Right. We got to lose the girls and keep the pooch. Life just kept on getting better and better.

We retired to our various beds, three of us in a state of severe sexual frustration, and one of us a Jerk with smelly washing. Bright Eyes was left to his own doggy devices and he curled up in a corner, falling into a deep, apparently untroubled, sleep.

I was awakened by a blood-curdling scream. Then another. It sounded as if Graham was being murdered in his bed by a mad axeman. I pulled the pillow over my head and hoped he would die more quietly.

We were all awake now,  so there was nothing for it but to go and investigate what the bloody, blithering, bastard, fucking stupid dog had done to Graham. Judging by the furore, it sounded as though Bright Eyes might have become hungry in the night and chewed our mate’s leg off.

It was not a pretty sight. Graham was supine on the bed, gripping the blanket at nose level, with abject terror in his eyes as they boggled upon what Bright Eyes had wrought. The little canine horror lay, quivering, atop the bed, roughly at Graham’s chest. He was surrounded, in a pooling circle, by prodigious quantities of bright pink regurgitated food, amongst which prawn heads were still vaguely discernible. Bright Eyes had obviously become lonely and hopped onto the bed for company during the night, and then had subsequently chundered his little doggy guts up. I don’t know how he had managed to conceal so much food inside his tiny body, but I swear at least twice his own bodyweight in pooch puke was now bespoiling the blanket. It looked a bit like a paella, smelled worse than the Jerk’s washing, and from that day on I have never been able to face Spain’s national dish without feeling distinctly queasy.

“Get the bastard thing off me!” pleaded Graham, his eyes rolling like a madman’s. “Throw it out of the bloody window or something!”

No-one seemed to fancy the job, so in the end I shooed Bright Eyes off the bed, opened the door of the apartment and watched him scamper away as fast as his little legs would carry him.

Mark bravely gathered up the blanket and did the obvious thing: threw it out of the window at the back, where it plummeted to the ground, dispensing doggy vomit in a cometary tail as it fell.

We had only a little time before we were due to catch the plane home, so I suppose washing it wasn’t really an option. I just couldn’t help feeling that throwing it out of the window was a little, well, indelicate. Some poor innocent was bound to discover it sooner or later.

Weeks later the apartment-letting company sent Mark a letter from the the apartment owner, complaining that one of our party had been sick and hadn’t even had the decency to clear it up properly. I don’t suppose we did much to enhance the Spanish view of Brits abroad, but the real culprit is probably still begging scraps and laughing his tail off right now.

Bright Eyes, I salute you.

Captain Limey is the alter ego of a mild mannered idiot. He can also be found on Twitter, either as @CaptainLimey or in his new guise as a purveyor of Gangland Mummy Porn in @50ShadesOfKray. Despite a magnificent costume, specially created for him by his mother, he has no super powers, unless you count the ability of his skin to eat through metal, given enough time. This has led to the buggeration of several watches of his acquaintance but has not thus far proved harmful to other lifeforms. The Captain hopes you will enjoy his blogged musings and forgive the occasional rant against the world at large, and idiot dictators in particular. They really get his gander up.
View all posts by captainlimey →
This entry was posted in Travel Tales and tagged Dogs, Food, Holiday, Majorca, Santa Ponsa, Sexual Frustration. Bookmark the permalink.