Posted on January 9, 2015 by captainlimey 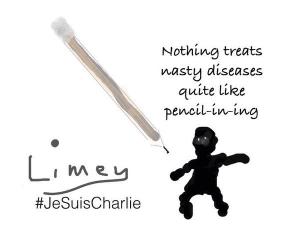 Watching the events in France these past few days made me remember the Japanese Tsunami and the blog I wrote at the time:

It isn’t that the Islamic terrorists caused anywhere near the amount of carnage of which Mother Nature is capable. On the contrary: compared to the tsunami, their legacy was, statistically-speaking, tame. In terms of media attention, however, their targets were selected for impact and had the desired effect.

What’s common to both events, though, is that they have the potential to focus the collective mind on the utter futility of killing each other when the randomness of the Universe already has you firmly in its sights. We exist, in the entropic scheme of things,  by dint of fortune: killing each other over abstract religious differences  is a wee bit like survivors of a shipwreck shooting holes in their own lifeboat because they couldn’t agree on the correct colour for its rubber  hull.

Seeking a bright side, it is this: four satirical cartoonists died ensuring that satirical cartooning will forever become an even more prickly thorn in the side of those intolerant idiots who think that you can kill critical thinking if you kill some of the critical thinkers. Like a hydra, the cutting off of one head will serve only to spawn many others. Until this week, the last time I drew a cartoon was in the Seventies. Yesterday I rediscovered the urge, thanks to the atrocities in Paris. I’m sure I’m not the only one.

Je suis Charlie. And so are most of the rest of us.