Have I Got News For You

Posted on February 4, 2015 by captainlimey

The current spell of cold weather seems to have put the media into an all-round tizzy. This morning I watched Good Morning Britain to see how they would report it. What follows is, I’d like to feel, the essence of what they did. Names have been changed to avoid litigation. 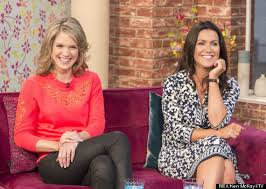 “Welcome back to the Good Morning Britain studio. My name’s Amanda Periwinkle…”

“Later we’ll be meeting Britain’s most talented dog, Buster, who has memorised the complete works of William Wordsworth in just over a week…”

“…but, first, our main story: you’ve have been tweeting literally in your thousands to say how alarmed you are by the strange weather.  Well, we’ve been investigating, and apparently the strange weather is all due to a disturbance in our weather patterns that has literally divided the country in half. In the east it has been snowing. In the west it has been very cold. Along the dividing line, if you stand still long enough, one half of you will turn into a snowman, the other half will freeze like a Heston Blumenthal ready-meal in liquid nitrogen.”

“That’s right, Amanda! So what’s it like to be literally experiencing different weather based purely on your postcode? We sent our intrepid reporters out into the Siberian conditions to find out. Bill Cundlebucket is in Yorkshire and Amelia Frogglicker is in Lancashire.  To you first, Bill. What’s it like in Yorkshire? I can imagine that under your padded overcoat you‘ve probably wrapped some very special thermal pants around your enormous lunchbox!”

“Hahaha, Cornelia. That’s for me to know and you to speculate upon. I will say, however, that the Cundlebucket ballsack is, for the moment, very much out of harm’s way.”

“Good news, Bill! So, Yorkshire: we’re hearing in the studio that alarming quantities of white snow have literally fallen from the sky during the hours of darkness. Can you confirm that?”

“I can indeed, Cornelia. You can see behind me the pretty Yorkshire village of Manyamicklemakesamucklethwaite. Yesterday evening when the villagers went to bed those houses were literally free of snow. Then, in the early hours, an unimaginable number of what can only be described as “white snowflakes ” started to drift down from the heavens.  As you can see many of them have landed atop buildings and trees. Those that didn’t have fallen onto roads, paths and gardens.”

“Bill, you say the number of these snowflakes is “unimaginable”. Is it possible to give our viewers at home a better estimate?”

“Well, Amanda, we’ve spoken to local experts, but it’s clear that the difficult task of counting the snowflakes has not yet begun. It may be literally days before a taskforce can be assembled. A local councillor told us that it might not even be possible to make a start until the snow has cleared.”

“I see. How are the locals bearing up, Bill? I see you have a couple of brave souls with you there.”

“I have indeed, Amanda. With me out here, a long way from her cosy cottage fireside, is Doris Fishstrangler and her husband, Eric. To you first, Doris: what do you make of all this?”

“It’s nobbut a sprinkle! Stop faffing about t’ village wi’ this bunch o’mitherin’ twerps and get back where you came from! Honestly, you’re neither use nor ornament!”

“As you can see, they’re putting a pretty brave face on it, Amanda. Back to you in the studio.”

“Thanks, Bill. In a moment we will go to Amelia in Lancashire, but first let’s get an insight into the science behind this phenomenon from our very own Weathergirl, Sandra. Good morning, Sandra. Great to see you’ve recovered from yesterday’s donkey incident.”

“Good morning, Amanda. Yes, I’m fine thanks, although the donkey did have to be put down.”

“So what can you tell us about this strange spell of weather, Sandra ?”

“Well, it’s all due to a kink in the jet stream that is dragging cold air across from Siberia. I only read about it this morning, but I was lucky enough to be able to talk earlier with a man who really knows his onions when it comes to science. He’s written a best-selling book, he’s the current Poet Laureate and he was the inspiration for Oscar-nominated actor Eddie Redmayne’s performance as Professor Stephen Hawking in the film “The Theory of Everything”. Here’s a chat I filmed earlier.”

“So, Professor Hawking, thanks so much for agreeing to this interview. What our viewers are dying to know is what, ultimately, lies behind the curious weather we’ve been experiencing recently? Where did it all begin?”

“Thank you, Sandra. That is a very interesting question…”

“What’s wrong with your voice?”

“That is because the computer is speaking for me.”

“Why does it sound like that? It’s a bit unsettling.”

“I didn’t want to sound like the bloke from the GPS.”

“Oh right. Well thanks for your time, Professor…”

“Don’t you want to know the answer to your question?”

“I promise not to mention black holes…”

“Well, Sandra, it must have been an honour to meet Stephen Hawking.”

“Thanks, Sandra. Well, to those of you sitting at home and worrying that the weather may literally be on your doorsteps, Sandra will be back with the weather details in just a while, and we’ll also be heading to Lancashire shortly to see if they have managed to revive Amelia Frogglicker who was struck down not ten minutes ago by hypothermia.”

“Meanwhile, here’s the local headlines where you are…”

5 Responses to Have I Got News For You