Launch Code of the Woosters

With apologies to the great P.G. Wodehouse. 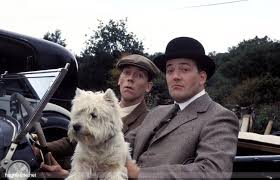 “I say, Jeeves! What do you make of this Trump fellow?”

For perhaps a millisecond, the great man paused in the act of pouring my constitutional snifter. A less keen eye might have missed it, but I am hewn from more perceptive rock. Jeeves is renowned from Bombay to Beccles as an imperturbable cove, so this fleeting pause was tantamount to him rolling around on the floor and caterwauling like one of those tiny ankle biters one sees littering the park on Saturdays.

He placed the fruits of his labours at my right hand.

“I’m not sure it’s my place to say, sir,” he prevaricated. “He is the new President, after all.”

“Come now, Jeeves!” I chided, after an appreciative sip at my w and s. “You have your views. I daresay he’s the talk of the Junior Ganymede.”

“As you know, sir, to disseminate what the club’s gentlemen have to say about their gentlemen is expressly forbidden.”

“Yes, yes, Jeeves!” I replied testily. “But I am hard pressed to believe that this chap would recognise a gentleman, even were one to fall on him from atop the Chrysler Building. Leave alone have a gentleman’s gentleman in his employ. He is a classic example of the American business tycoon. You know the type: two hundred decibels in both speech and trouser.”

“Very amusing, sir. And you are correct. If he does, indeed, have a gentleman, the club has never heard of him.”

“Quite so, Jeeves. We Woosters have a nose for that sort of detail. Instilled in us by aunts through the generations, no doubt. But you, Jeeves, are an acute observer of the human condition. You’re a thinker, like me. What do you make of him? Warts and all.”

“There is something about him which is extremely familiar, sir.  We have run across his like on many an occasion. Not to mention hidden from him during several escapades.”

The Woosters are of stern stock. None sterner. Years of public schooling and the aforementioned aunts have seen to that. But as Jeeves spoke I am not ashamed to say that a platoon of chills performed a route march from my coccyx to my scapulae, before falling out in the general area of the nape of my neck. Every hair on my body stood to attention and saluted.

“Spode!” I gasped, expelling the dread word in much the same way as a Satanist might read aloud from the Grand Grimoire.

Roderick Spode, the infamous Seventh Earl of Sidcup, is an odious oik and as close to a nemesis as yours truly has ever had, assuming you exclude various fiancées and Aunt Agatha. He is of the goose-stepping dictator persuasion and has frequently espoused the view that he would as soon squash me underfoot, like the worthless worm I am, as offer me tea and biscuits. His general vocabulary is one in which you suspect the words “vile” and “jelly” are never far from the head of the queue. One time leader of the notorious Black Shorts, he is not a man you would want to indulge with any form of power. If placed in charge of an entire country I have little doubt its populace would never again eat imported root vegetables, nor pass through any form of checkpoint with an unmeasured kneecap.  I mean to say, the blighter wears shorts!

“You are saying this Trump is an American Spode? By jingo, Jeeves, this is the very opposite of that Doctor Pancho fellow in that rum book by that French chappie!”

A frown breezed briskly across the mighty Jeeves brow. I knew his impressive brain was whirring and clicking just below.

“Doctor Pangloss, sir,” he said, after a moment’s thought. “From Candide, by Voltaire. ‘Everything is for the best in the best of all possible worlds’.”

“That’s the fellow, Jeeves! Except the opposite. This is for the worst in the worst of all possible worlds!”

“Is there nothing we can do, Jeeves? Would it be too much to hope that this Trump character has an Achilles’ Heel? Perhaps a sideline in lingerie? A ‘Eulalie’ to which he might be susceptible?”

“I have every certainty that there is, sir. One can only hope that it is discovered sooner, rather than later. The Americans have a Central Intelligence Agency, as implausible as that may sound. I believe they are working on it.”

“Well more power to their elbow, Jeeves! Let us agree to ponder upon it ourselves. Who knows, on the way to my club I might come up with some form of weapon to use against this blister!”

I drained the last of the single malt.

“Indeed, Jeeves! Fetch me another bracer, if you will! There’s a definite chill in the air.”

2 Responses to Launch Code of the Woosters